The Professor is IN: Jazz and Dancing

"The Professor is IN" by Adrian Cunningham is one of the most popular columns in The Syncopated Times. This month I published the column and inadvertently omitted the italics in the original formatting. And as Professor Cunningham says, "This stuff is really important." To make amends, here is the Professor’s column as it was originally supposed to appear:

As a bandleader performing for many swing dancers in recent years (in the US and worldwide), I’m inspired to see the reuniting of jazz and dancing; a marriage that’s been separated for a long time. Furthermore, seeing a room full of young people connecting with this music is encouraging for the future of the scene.
My own early dance experience as a young Australian lad consisted of mindlessly throwing my body around to whatever loud and awful electronic drivel the DJ decided to serve up—in an unsuccessful attempt to woo any young lass desperate or drunk enough to think I looked cool doing it. Those days are long gone, thank goodness.
We all like to think we have a bit of Fred Astaire in us, when in reality our dance-floor grace might be more akin to Fred Flintstone.
And due credit to the swing dancers of the world: Lindy Hop dancing ain’t easy. Take it from me. I’ve moved on from my youthful gyrations and have been swing dancing for a while now. And though I’m by no means a Frankie Manning on the dance floor, I dance enough to know it takes a lot of work to look good out there.
Let’s get technical for a minute. The basic Lindy step is a Six Count step. And swing music is almost always eight count music. You don’t have to be Einstein to figure out that that just doesn’t add up.
But there’s not just the Six Count Basic, there's also the Shag, the Swing Out, the Charleston, Balboa, Big Apple...dear lord.
And the traditional role of the man is to take the lead. You’ve gotta make all the big decisions on the dance floor.
So, for all you brave lads out there, here’s the Professor’s guide for swing dancing as a lead.
Step one: get some lessons! You need to have some idea of what you're doing. And if you can’t dance, and you ask a girl who can—she will EAT YOU ALIVE. Make no mistake my friend, it’s a jungle out there.
Step two: once you’ve developed some skills, pluck up the courage to ask someone to dance. Forget about any conversation. Lose the beat and you’re down a rung on the dance floor pecking order. You gotta concentrate on those feet—but don't look at them! They are supposed to have a bloody mind of their own, irrespective of what the top half of your body is doing. (You know that game where you pat your head and rub your stomach? Times that by a thousand.)
Now the song starts. No turning back now. And your mind goes something like this (don’t worry, it’s perfectly normal):
Please don’t be a fast song, please don’t be fast. Damn it! It’s fast. But I can handle it. Positive thoughts there, buddy.
And here we go. Okay, so you know about three dance moves. Don’t waste them early on. Okay, so start by just bobbing up and down. That’ll kill some time. Alright!
Okay ask her her name. But don't lose the beat. One word to every beat. Here goes-
"What’s.....your.....name...?"
Great! Bugger, I didn’t catch her answer. Damn you, distracting footwork.
One, two...okay ready...now turn her. Not that way! Bugger. Don't worry; you can cover it up. Do some fancy footwork. But I don’t know any! That's okay. Just make something up, and do it fast enough so she won’t notice. Good save sir!
Is she enjoying it? Give her a smile and make her think you're actually enjoying this. Okay, good. Hmm...she kinda looks like she’s smiling. Or is she in pain? Maybe it’s gas. Is it gas? You can't ask her that, you idiot. Focus!...let's get back to it. Now—let's try the Charleston. It worked! Good one!
Bloody hell, when does this song end? It seems like it’s been going for 30 minutes. Don’t let on like you want it to end, smile and do some more bobbing. Ah, bobbing, the ultimate filler.
And finally, the song is over. What a relief! Thank her and walk away...fast. Hang on—we were dancing to a live 17 piece band?
I didn't even notice.

Reedman extraordinaire Adrian Cunningham is the leader of Professor Cunningham and his Old School Jazz Band, based in New York City. His most recent CD is Ain't That Right! The Music of Neal Hefti issued on the Arbors Jazz label. Visit his both his sites on the world wide web: www.adriancunningham.com and professorcunninghamjazz.com.

The December 2016 issue of The Syncopated Times was published yesterday. Here's the cover: 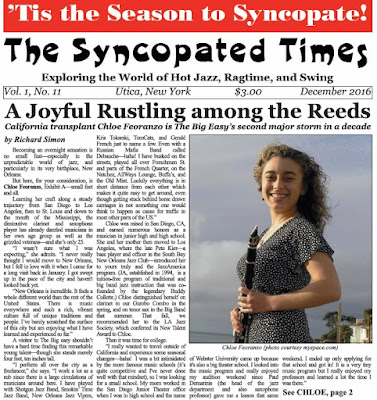